What a Difference 40 Days Can Make

Mryl Jeffcoat's family rescued this egg that became a duckling and then a full-fledged duck. Anyone who knows me knows I'm all for rescuing animals and wildlife of all kinds so I thought this was a great rescue story to share with you. The duck is spending some quality time with Nana this weekend. How sweet. 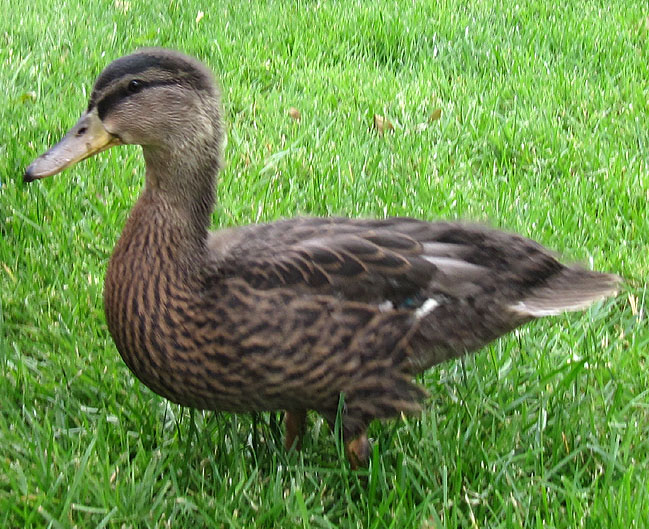 What a difference 40 days can make.  It has been about 40 days since I blogged about "Lucky," the baby duck  my daughter's family had hatched from a "mis-laid" egg.

It had all began back on very wet and windy morning, the 23rd of March.  My son-in-law, Steve, had just arrived at his office complex, when he quickly noticed two ducks, a male and female (mallards to be exact), standing in the parking lot. Because the area is along a greenbelt area with ponds, this wasn't an unusual event. The area is also populated with wild turkeys.

But this wasn't going to be just any other ordinary morning. The female duck was standing by an egg. Steve approached the egg, thinking he could move it to safer digs at a nearby bush. Alas, as more cars arrived the ducks became agitated and flew away. Soon it became evident they weren't returning.

The egg was taken home, and the family set up an incubator, as they prepared and waited patiently for the big event.

29 days later, the little duckling pictured below (and above) pecked its way into the world. It was given the name, "Lucky."

Lucky's family decided to go camping over this Memorial Day weekend.  So, he is having some "Nana time" in my backyard.  Isn't it amazing how much Lucky has grown these past 40 days.

The plans are to eventually move Lucky up to better digs on native lands at the greenbelt area and ponds where her feathered gene pool is:-)  In the interim, Lucky seems content to  stay near her reflection in the mirror, or following humans around the backyard, while hunting for bugs to eat!

Thinking of Selling Your Home in Trinity-New Port Richey to Hudson?
Craig and I have been selling in this area for 20+ years.
Call Me or email my assistant, Shayna.

Save A Life: Adopt A Shelter Pet